Nairobi, Kenya (19 December 2019) – One month ago, a hyena, two Endangered Lappet-faced Vultures, and three Critically Endangered Rüppell’s Vultures were confirmed dead at the scene of an illegal poisoning event in Ol Kinyei Conservancy in the northeast Maasai Mara. Five vultures were found poisoned, but still alive, including three Rüppell’s, one juvenile White-backed, and one Lappet-faced Vulture. Sadly, one Rüppell’s Vulture died overnight. At the time, Kenyan Conservation Hero and Peregrine Fund Vulture Liaison Officer, Valerie Nasoita, jumped into action putting all her Wildlife Poisoning Intervention Training knowledge into practice. With the help of Kenya Wildlife Service, the Olderkesi Conservancy, and Kenya Bird of Prey Trust, Nasoita and the group of first responders were able to stabilize the poisoned, but still living, birds.

The four sick vultures were taken in to rehabilitation care to recover from the effects of the poison. Fortunately, the recovery was successful and now the birds’ GPS tracking units show them soaring again over the Mara-Serengeti landscape. This success is a small relief from the poisoning crisis that is killing vultures across the continent and causing them to be among the fastest declining birds on the planet.

NGOs throughout the region have been working to stop the scourge of retaliatory wildlife poisoning in southern Kenya that has devastated populations of critically endangered vultures and other scavengers. Retaliatory poisoning usually occurs when predators such as lions, hyenas, and leopards attack livestock. Without compensation, livestock farmers resort to lacing their dead livestock with easily accessible agro-chemicals aiming to kill predators. Vultures that scavenge in large numbers on dead animals often succumb to the poison and hundreds can die as a result.

The GPS units that biologists attached to the rehabilitated vultures showed that three of the four birds have ranged widely into Tanzania, indicative of the vast distances they can cover. 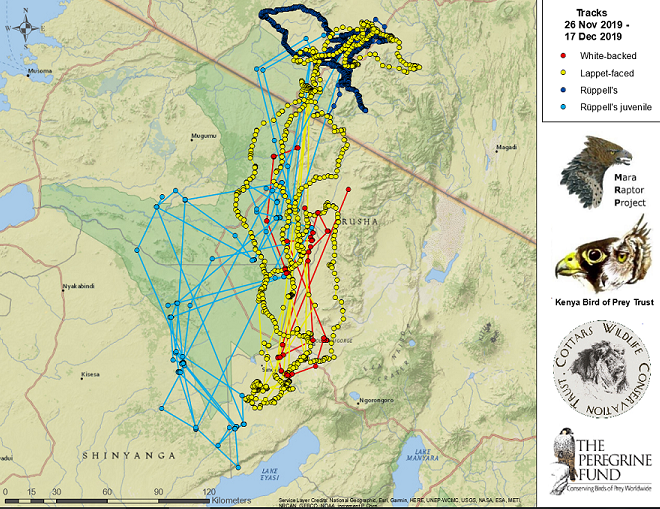 Shiv Kapila of Kenya Bird of Prey Trust describes the value of the GPS units, “Fortunately all four birds are doing well post release - flying long distances and apparently foraging normally. This highlights the importance of longer rehabilitation and treatment in captivity. The vultures are currently being monitored using GPS transmitters, to enable a fast response in the event of any relapses. Hopefully this will become the standard procedure when assessing the health and well-being of vultures rescued from poisoning instances.”

Stratton Hatfield of the Mara Raptor Project agrees, “It is great to see rehabilitated vultures doing so well after a poisoning. These transmitter data provide tangible evidence that our poisoning response efforts are making an important difference.”

Jamie Manuel of the Olderkesi Conservancy and Kenya Bird of Prey Trust Raptor Rehabilitation Centre shares his feelings on the recovery, “We’re very pleased with the progress of the rehabilitated vultures after their release. As our partnership of First Responders grows, we hope to reach a more professional level of raptor rehabilitation and to increase our efforts to successfully rehabilitate individuals of multiple species. This work proves that even with small amounts of funds we can have great results – so we would like to ask people to support us and others that help vultures survive the onslaught. Without such intervention these vultures would have no chance of survival.”

Ralph Buij of The Peregrine Fund adds, “Vultures are such long-lived birds that only start breeding at 4 to 7 years – and then produce only a single chick each breeding attempt. Therefore, it is important we try to save every single vulture affected by this poisoning. We are hopeful these rehabilitated vultures prove capable of breeding again one day. We have our fingers crossed for them.”

People who are interested in helping can support this project online at https://peregrinefund.org/membership by selecting “African Vultures” from the drop down menu.