VERMILION CLIFFS, Ariz. – Every year thousands of people gather at Vermilion Cliffs National Monument to watch one of conservation’s biggest spectacles – the release of captive-bred California Condors to the wild. This day is a celebration of the dedication and tenacity that hundreds of people have put into bringing the iconic California Condor back from the brink of extinction. In the 1980's, there were only 22 individual birds left on the planet, yet today they stand at nearly 500. This year, with Covid-19 affecting our ability to gather in large groups, we will not be able to hold an in-person public release at the Vermilion Cliffs, but the celebration will go on!

The Peregrine Fund will release up to four California Condors atop the spectacular ledges of Vermilion Cliffs National Monument in northern Arizona at 11am MST (12pm MDT) Saturday, Sept. 26. Since the public is unable to watch from the annual viewing site, we are excited to offer the opportunity to observe the release virtually on The Peregrine Fund’s YouTube Channel.

Watch as young condors unfold their wings and take to the skies of northern Arizona for the first time in their lives. Because the biologists are unable to schedule exactly when the birds will choose to leave their release pen, the event will have a picture-in-picture set up with a camera trained on the release pen, and will include videos and interviews with the condor biologists and conservationists who work with these massive birds! Viewers will also be able to chat with and ask questions to the condor biologists who are on the cliff, behind a blind, waiting for the birds to take off. 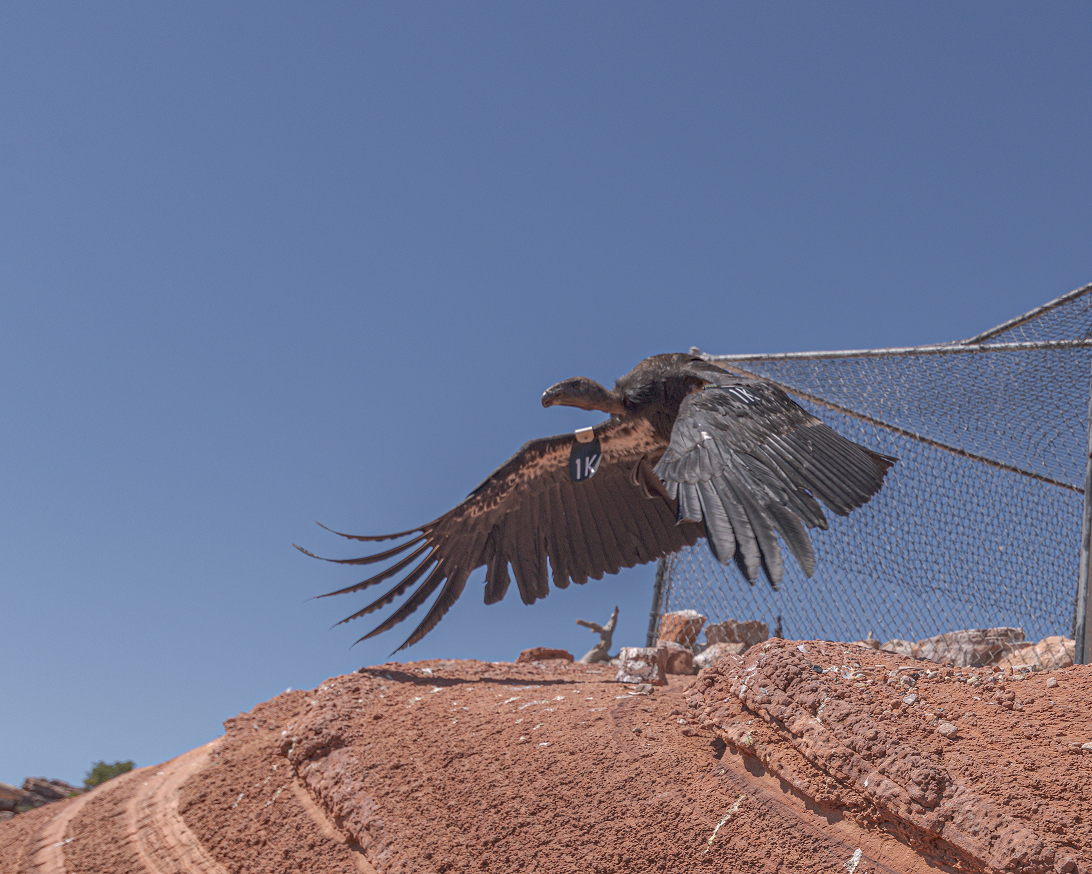 Tim Hauck, lead condor biologist for The Peregrine Fund, says, “While we were disappointed that we can’t hold the live, in-person event this year, we are excited about the opportunity for a more global reach with the virtual event and that people who normally can’t make the trip, will get a chance to experience it with us.”

This will be the 25th annual public release of condors in Arizona since the southwest condor recovery program began in 1996. The young condors hatched at The Peregrine Fund’s World Center for Birds of Prey in Boise, Idaho and several partner organizations, including the Oregon Zoo, Los Angeles Zoo, and San Diego Zoo Safari Park and were transported to Vermilion Cliffs National Monument for release to the wild.

The historical California Condor population declined to just 22 individuals in the 1980s when the greater California Condor Recovery Program was initiated to save the species from extinction.  As of August 2020 there were 102 condors in the wild in the rugged canyon country of northern Arizona and southern Utah and the total world population of endangered California Condors numbers more than 500 individuals, with more than half flying the skies of Arizona, Utah, California, and Mexico.

The Arizona-Utah recovery effort is a cooperative program by federal, state, and private partners, including The Peregrine Fund, the Bureau of Land Management’s Vermilion Cliffs National Monument, Arizona Game and Fish Department, U.S. Fish and Wildlife Service, Grand Canyon and Zion national parks, Utah Division of Wildlife Resources, and Kaibab and Dixie national forests among many other supporting groups and individuals.

For more information about this California Condor recovery project: