BOISE, Idaho ‒ African vultures are famous for quickly finding carcasses, so much so that they are considered clairvoyant in parts of Africa. But just how do vultures know where to find food across vast regions in the first place? In a paper appearing in the January 8 edition of the journal PLoS ONE, Dr. Corinne Kendall of Columbia University and African Vulture Technical Advisor with the Wildlife Conservation Society and colleagues have discovered that vultures – rather than aggregating where animals are most abundant as previously thought – instead focus on areas and conditions where animals are most likely to die.

Corrine Kendall prepares to release a White-backed Vulture after capturing it briefly as part of her research on vulture migrations in Africa.

For decades, scientists have assumed that vultures would follow the largest food source available. In the case of Africa’s Mara-Serengeti ecosystem, this would be the migratory wildebeest herds, which in recent years have numbered in the millions. Instead, this study found that two of the three species of vultures studied preferentially selected areas of low rainfall and thus presumably high prey mortality.

Data were collected from GSM-GPS telemetry devices attached to three species of vultures in the Mara-Serengeti ecosystem. The devices send text messages back to the researcher detailing an individual bird’s location and altitude. The data revealed that vultures focused on the immense wildebeest herds only during the dry season when hundreds of wildebeest die each day from starvation or drowning during their dangerous river crossings.

“Our study shows that vultures seek out areas not where wildlife are most abundant, but where they are most likely to die,” said lead author Kendall. “This shows that for vultures, prey mortality is more important than prey abundance.”

The researchers found that for the rest of the year, vultures travel enormous distances in search of food.

“What has really surprised us is what the vultures do the rest of the year,” Kendall said. “From November to June, the vultures travel all over Kenya and Northern Tanzania, with some individuals using an area of more than 200,000 square kilometers (77,000 square miles). That’s a region larger than New Jersey and New York State combined or roughly the size of the entire United Kingdom.”

As one of the only obligate scavengers in the animal kingdom, vultures are specially adapted to feed on dead animals, or carcasses.

Study co-author Keith Bildstein, director of conservation science at Hawk Mountain Sanctuary said, “We knew that vultures use efficient soaring flight, keen eyesight, and even used information from each other to find food, but we had a poor sense of how they decide where to search on a landscape scale.”

In recent years, these large movements have spelled disaster for the birds. White-backed vultures and Rüppell’s vultures, two of the species studied, have been up-listed to “Endangered” status by the IUCN due to dramatic declines seen throughout the African continent.

Co-author Munir Virani, director of Africa programs for The Peregrine Fund, said that because the vultures spend so much time outside of protected areas, they are extremely susceptible to poisoning, which often occurs when ranchers put pesticides on the carcasses of cows and other animals killed by lions or hyenas. “You can imagine how difficult it is to protect a species that uses not just multiple parks, but also spends a lot of time in areas that are completely unprotected,” Virani said.

But protecting these critical scavengers, which help to keep the African savannas clean and reduce the risk of rabies and other diseases, is now the focus of a new effort by the Wildlife Conservation Society, The Peregrine Fund, and Hawk Mountain Sanctuary.

Steve Zack, coordinator of bird conservation at WCS, is working with Kendall and others in shaping a conservation effort to revive vulture populations while eliminating the poisoning. “This information is critical to understanding the scale of effort needed to protect vulture species in East Africa,” he said. “The new knowledge makes clear that engaging local communities well beyond park boundaries is needed to confront and eliminate the poisoning.”

This work was done in collaboration with Dr. Virani of The Peregrine Fund, Dr. Hopcraft of Frankfurt Zoological Society, Dr. Bildstein of Hawk Mountain Sanctuary, and Dr. Rubenstein of Princeton University. 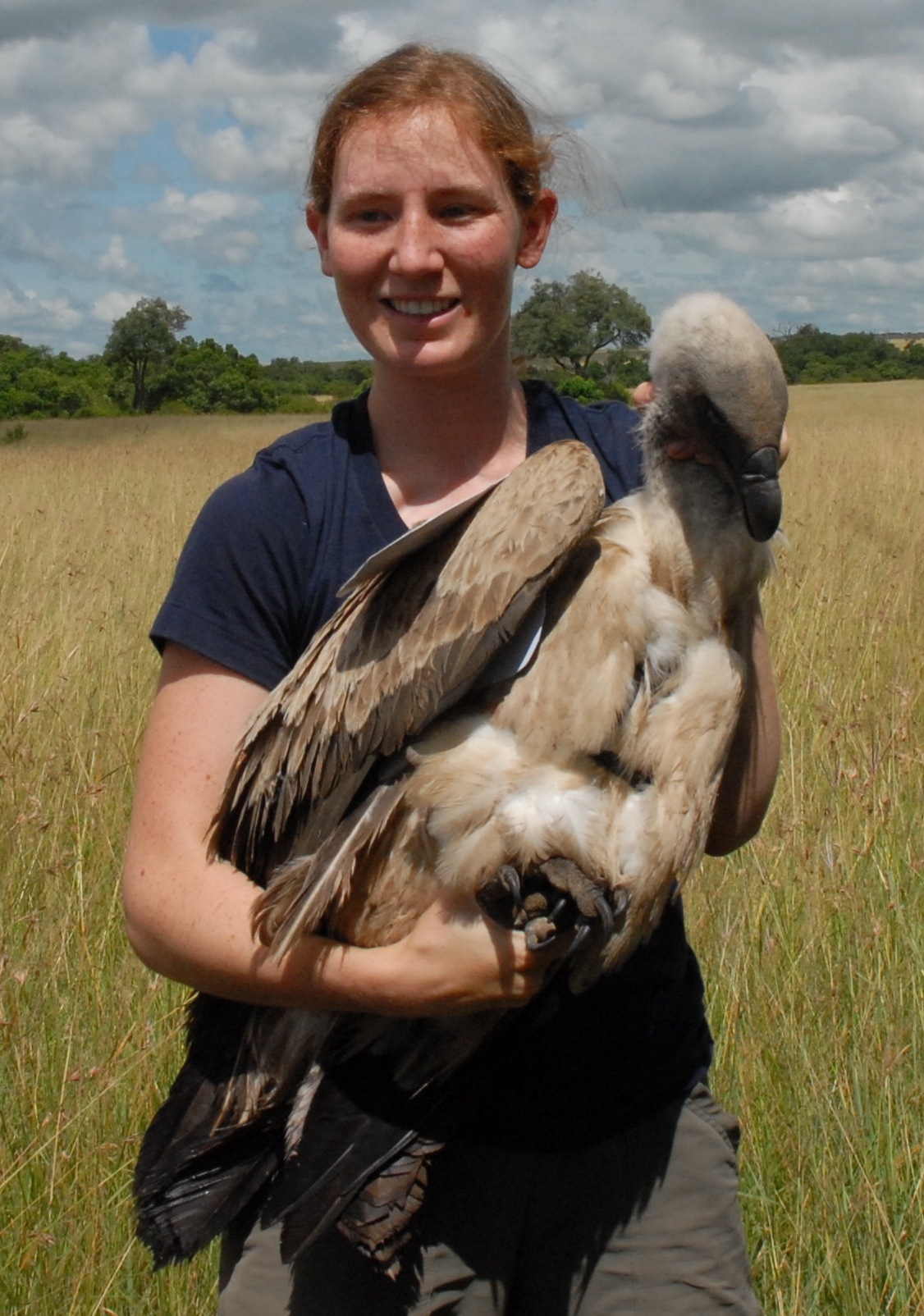 Corrine Kendall prepares to release a White-backed Vulture after capturing it briefly as part of her research on vulture migrations in Africa.