On a spring day in 1980, Dr. Tom Cade climbed into a Peregrine Falcon nest box on top of a release tower in Brigantine National Wildlife Refuge in New Jersey. Just a couple of years earlier, Tom’s team of biologists and falconers had bred, raised, and released the falcon pair that now raised their own family on this tower. These two birds were part of a nationwide recovery program for the species.

Peregrine Falcon populations had declined drastically in the 1950s and ‘60s due to the widespread use of DDT – a pesticide that interfered with calcium metabolism and caused birds to lay very thin-shelled eggs that would crack during incubation. By 1970, Peregrine Falcons were extinct in the eastern United States and fewer than 40 pairs were estimated to remain in the west. Dr. Cade, an ornithologist and lifelong falconer, was acutely aware of this decline and worked with others across the nation to ban the use of DDT and develop a recovery plan for our nation’s fastest animal.

Tom marked one of the proudest moments of his career atop that tower in the spring of 1980. That’s when he discovered three young nestlings—some of the first Peregrine chicks produced in the wild in eastern North America since the 1950s. Looking back on the day, Tom recalled, “I then understood that recovery of the Peregrine would be an accomplished fact in a few more years.”

He was right. In August of 1999, Tom stood on stage with then-Secretary of the Interior Bruce Babbitt to officially declare that the Peregrine Falcon was recovered in North America and had been removed from the Endangered Species List. To this day, it’s considered among the greatest conservation success stories of all time – Tom would refer to it as an effort of “teamwork and tenacity.”

In saving the Peregrine, Tom co-founded a non-profit conservation organization to effectively manage the financial support being offered by the public. Called The Peregrine Fund, this organization grew to become much more than he originally envisioned, and over the past five decades has worked with more than 100 species in 65 countries worldwide. Many species such as the Mauritius Kestrel, Northern Aplomado Falcon, several species of Asian Vultures, California Condor, and more are thriving today because of work The Peregrine Fund and its many partners have undertaken.

“The world of wildlife conservation has lost a pioneer and champion today,” said The Peregrine Fund’s President and CEO, Dr. Rick Watson. “Tom fought for Peregrines and practical conservation solutions, and mentored generations of passionate individuals. His reach extended around the globe to inspire raptor research and conservation on virtually every continent and on behalf of hundreds of species.”

“While we are devastated by his passing, we are uplifted knowing his legacy lives on in this organization, and among his many students, friends, followers, and supporters. We’re grateful Tom continued to travel, write, practice falconry, and visit with the staff up until his last days. His advice, conviction, and gentle presence will be sorely missed.”

“Our thoughts are with Tom’s wife and devoted partner, Renetta, and their children and grandchildren in this time of loss.”

Since his first ornithological survey of St. Lawrence Island in the Bering Sea in 1950, Tom’s passion for natural history and his professional career spanned nearly seventy years. It involved teaching at Syracuse University and Cornell Lab of Ornithology in New York, post-doctoral research on desert birds and raptors in southern Africa, starting the Peregrine breeding program at Cornell University, co-founding and leading The Peregrine Fund, and researching the critically endangered Mauritius Kestrel.

The Board and staff of The Peregrine Fund mourn the loss of their co-founder and mentor, one of the world’s most visionary conservationists and widely respected scientists, Professor Tom Cade.

We have established a fund in Tom's name to honor his achievements and ensure his legacy continues in perpetuity: The Tom Cade Fund

View Tom's profile and photos from his life 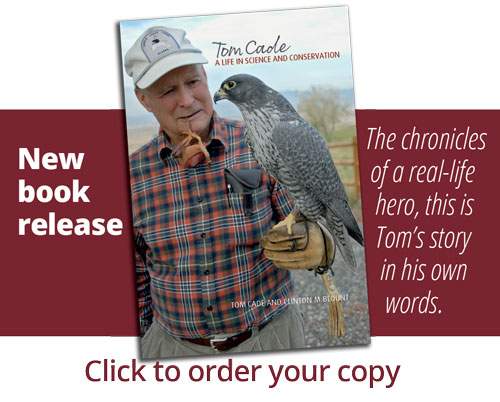