Share this news:
Meet Tulio the nestling Ornate Hawk-eagle and newest avian ambassador at the World Center for Birds of Prey!

The Peregrine Fund’s World Center for Birds of Prey is excited to announce a new member of the education flock – Tulio, a 52-day old Ornate Hawk-eagle. Visitors to the center may have the opportunity to see Tulio during one of his daily trips outside to become acclimated to his new home. 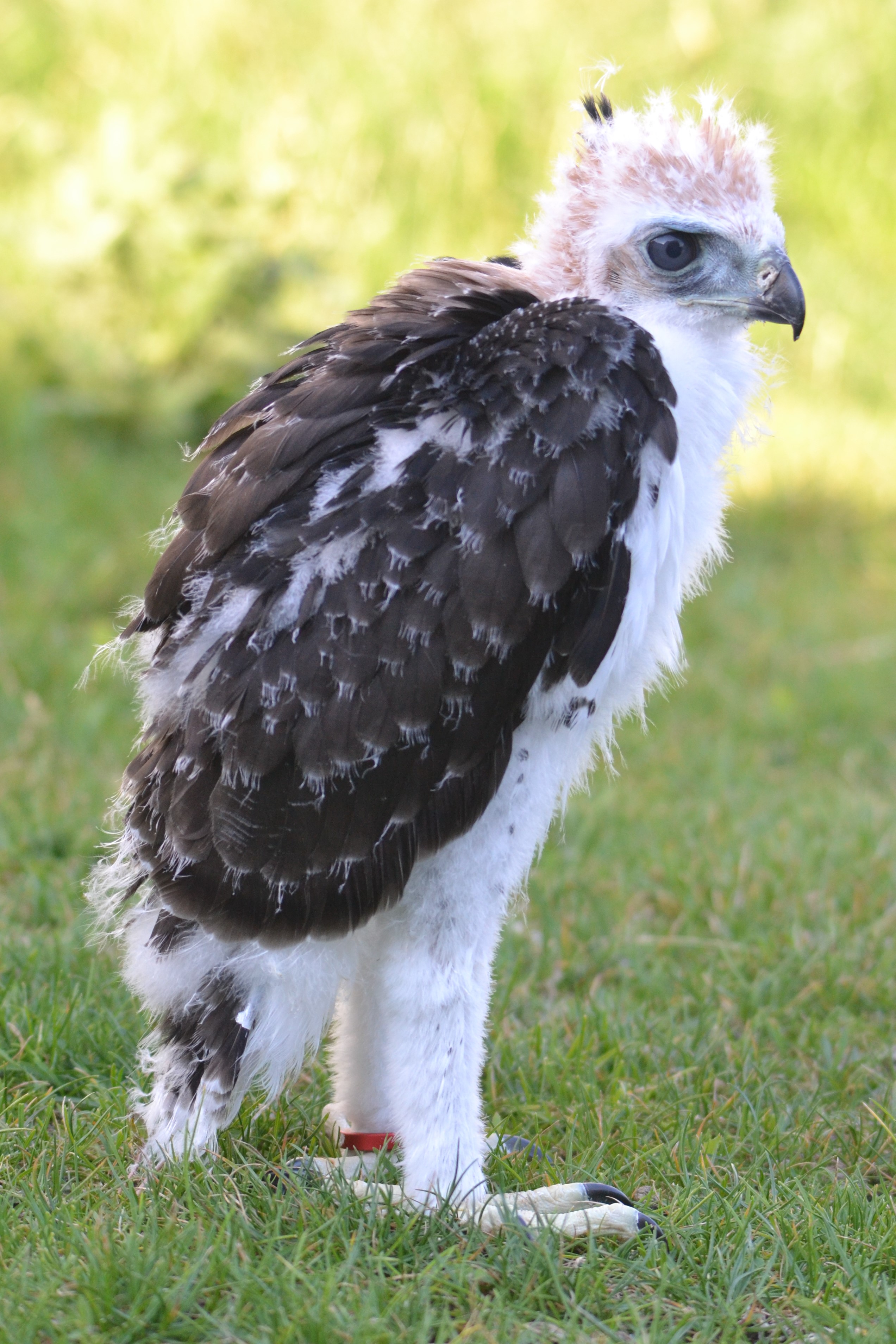 Tulio arrived at the center at 27 days old and has been cared for by the expert raptor care staff at the center. The center has had another Ornate Hawk-eagle, Fancy, who was a long-time resident but was recently requested to join a breeding program. Her genes are under-represented in the North American captive population of Ornate Hawk-eagles and this makes her a valuable bird to pair up for breeding. Fancy moved into the program, located in Nevada, and the center received Tulio in return. 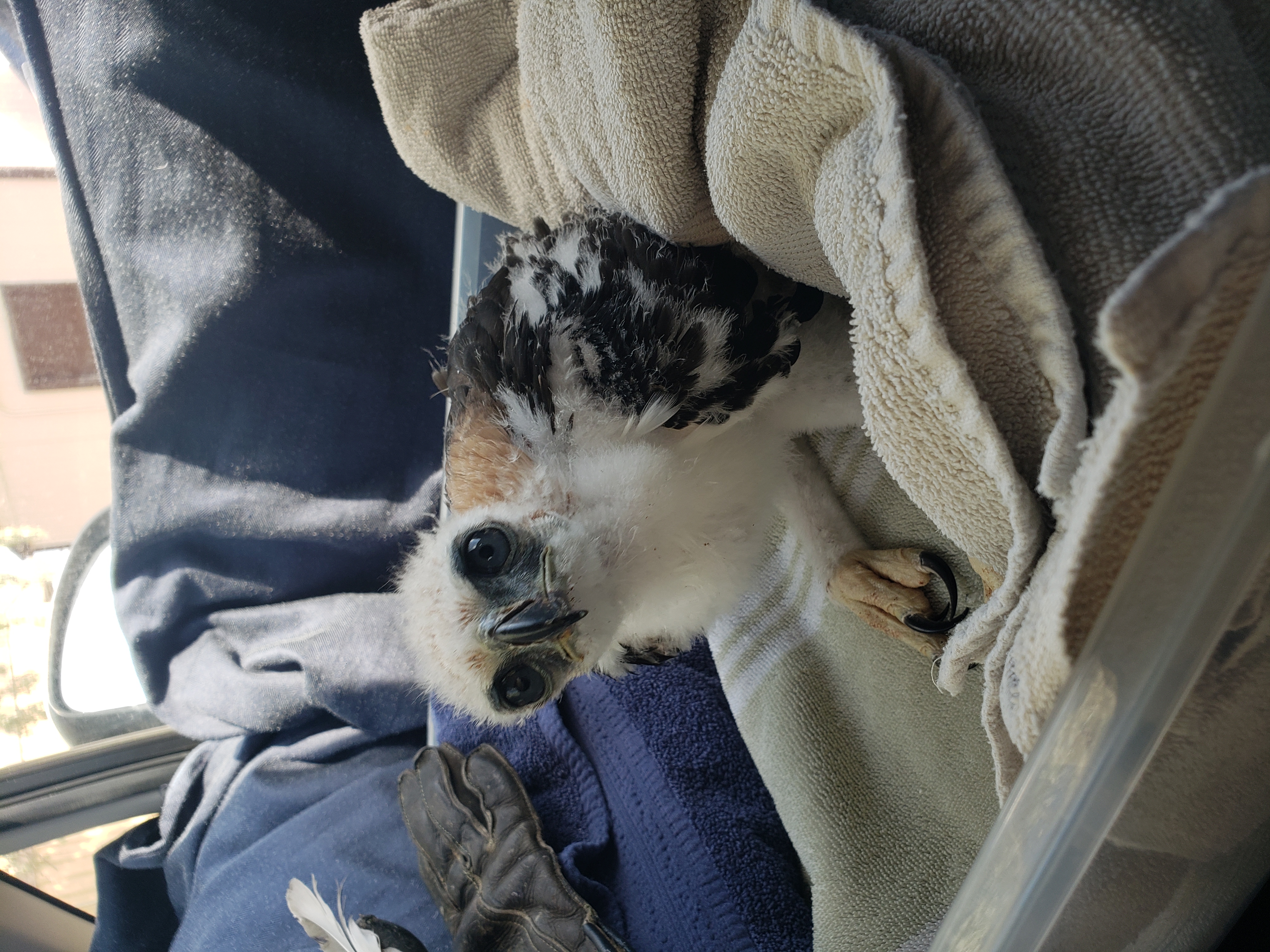 The staff are hand-raising Tulio, which involves multiple feedings throughout the day, taking him home at night for round the clock care, and helping to acclimate him to his new job as an ambassador for his species. Monica Pittman, Curator of Birds at The Peregrine Fund, says, “It’s a lot of work to care for young raptors, but it will be worth it when he’s older and comfortable being around people for education programs. We have big plans for him since he’s such a unique and inspiring species. We hope everyone falls in love with him and wants to do something to protect birds like Tulio in the wild.”

“The Peregrine Fund works to save species of birds of prey all over the world. We’ve been very successful at it and employ various tactics to conserve raptors,” says Tate Mason, Director of the World Center for Birds of Prey. “One thing that we know is critical to our success, is engaging with people everywhere we work. From villages in Madagascar, Kenya, and Panama to right here in Boise, Idaho, people care more about conserving wildlife when you’re able to give them a personal connection to the birds we’re working to save.”

Ornate Hawk-eagles are found in subtropical and tropical areas of the New World. Historically, they were found from southern Mexico through Central and South America all the way down to northern Argentina. Like most wildlife, the Ornate Hawk-eagle is susceptible to habitat loss. As rainforests are cut down, there are fewer places for this beautiful bird of prey to go. If they are seen too close to human settlements, they are in danger of being shot by people who fear they may eat their chickens. The Peregrine Fund is working to conserve Ornate Hawk-eagles throughout Central and South America through research, education programs, improving local economic sustainability, and habitat protection.

Tulio is likely to fledge, or start to fly, at some point in the next two to four weeks. At that time, he will move into one of the outdoor exhibits at the center to continue acclimating and begin training for participation in education programs and potentially Fall Flights, the center’s bird shows that take place mid-September through October each year. “We’re excited to see Tulio grow and become a part of our avian ambassador team,” says Pittman. “He is going to do a great job of inspiring people to care about raptors. I mean, he’s so cute, how could you not fall in love with him?”

The World Center for Birds of Prey is open from 10 a.m. – 5 p.m. Tuesdays through Sundays. Admission is $10 for adults, $8 for seniors, $5 for youth ages 4-16, and free for children under the age of four and members. Admission can be purchased in advance online or at the center. Learn more at https://www.peregrinefund.org/visit