Our National Birds: The American Eagle and The Thanksgiving Turkey. "May one give us peace in all our states. The other a piece for all our plates."

Share this news:
Let's talk Turkey...and Bald Eagle!
Did Benjamin Franklin really want the Wild Turkey to be the national symbol of the United States?

How did the Bald Eagle become the national bird of the United States? 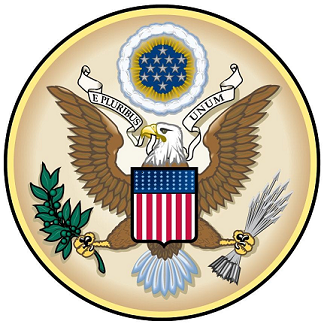 In 1782, several years after declaring independence from Great Britain, the United States adopted a seal for the young country. Benjamin Franklin, along with Thomas Jefferson and John Adams, was a part of the committee to design the seal. Franklin's proposal for a seal design had no birds located on the emblem at all, but Charles Thomson, an Irish-born Patriot leader from Philadelphia and secretary of Congress, submitted the winning artwork that was immediately approved by the Continental Congress.

Thomson's work contained the image of a Bald Eagle holding an olive branch in its right talons and thirteen arrows in its left talons. It supports a shield upon its breast and and clutches a scroll in its beak with the words, "E pluribus unum," meaning "Out of many, one." With the adoption of this design as the Great Seal of the United States, the Bald Eagle became the national bird.

Did Benjamin Franklin want the Wild Turkey to be the national bird?

Since Benjamin Franklin's suggested design for the seal didn't contain any birds, it is believed that he did not lobby for the Wild Turkey to be the national bird. In fact, the only written mention of his disdain for the Bald Eagle wasn't until 1784 when he wrote a letter to his daughter where he questions the decision. In the letter he makes it clear that he did not believe the Bald Eagle to be representative of the new nation and he remarks that the bird on the seal looks more like a turkey. The letter reads:

“For my own part I wish the Bald Eagle had not been chosen the Representative of our Country. He is a Bird of bad moral Character. He does not get his Living honestly. You may have seen him perched on some dead Tree near the River, where, too lazy to fish for himself, he watches the Labour of the Fishing Hawk; and when that diligent Bird has at length taken a Fish, and is bearing it to his Nest for the Support of his Mate and young Ones, the Bald Eagle pursues him and takes it from him.

"With all this injustice, he is never in good case but like those among men who live by sharping & robbing he is generally poor and often very lousy. Besides he is a rank coward: The little King Bird not bigger than a Sparrow attacks him boldly and drives him out of the district. He is therefore by no means a proper emblem for the brave and honest Cincinnati of America who have driven all the King birds from our country…

“I am on this account not displeased that the Figure is not known as a Bald Eagle, but looks more like a Turkey. For the Truth the Turkey is in Comparison a much more respectable Bird, and withal a true original Native of America… He is besides, though a little vain & silly, a Bird of Courage, and would not hesitate to attack a Grenadier of the British Guards who should presume to invade his Farm Yard with a red Coat on.” 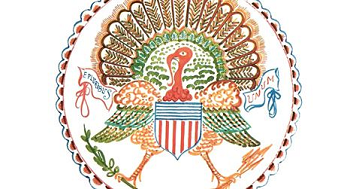 In fact, the only time a seal of the United States has featured a Wild Turkey was when artist, Anatole Kovarsky, designed the image on the left for the November 24, 1962 issue of The New Yorker.

Is Franklin right about the moral character of Bald Eagles?

Well, sort of. Since Bald Eagles aren't humans, we are slow to assign them "characters" in the way we might describe a person, but what we can say about our nation's symbol is that they tend to be opportunistic when it comes to acquiring their food.

Bald Eagles are known for regally catching fish in their bright yellow feet, held firm by sharp talons, from glistening blue lakes in front of the back drop of purple mountains majesty, but they're also not quick to shy away from an easy meal...such as carrion, or dead animals. In fact, Bald Eagles are often seen feeding on dead fish, mammals, and other birds that wash ashore. They can also often be seen hanging out in garbage dumps looking for a delicacy to snack upon. One can imagine that Benjamin Franklin would not have been pleased to see our national bird perched high atop a trash heap.

Franklin wasn't exactly wrong to liken Bald Eagles to robbers either. It is true that Bald Eagles are known for stealing fish from Osprey (Franklin calls them "Fishing hawks") or even other, particularly juvenile, Bald Eagles (photo below). He also wasn't wrong to note that the national symbol will also respond to smaller birds chasing them by retreating. Smaller birds see Bald Eagles, and other birds of prey, as potential threats and will practice a behavior called "mobbing" to scare them away from an area. Many raptors are quick to skedaddle when smaller birds begin diving at their heads.

So should we change our national bird to the Wild Turkey?

Probably not. Though Bald Eagles may have seemed "immoral" in their behavior to Franklin, their survival instincts seem to serve them well, and, since the banning of DDT, Osprey populations in the United States are strong despite the occasional stolen meal.

Bald Eagles have become as much a symbol of the United States as the stars and stripes and apple pie, so we would advocate keeping them in that status. We also can't deny the beauty of their white heads and wide wingspans soaring against a beautiful blue sky. They are regal, they are majestic, and they embody strength.

...besides, would you really want to be eating Bald Eagle at your next Thanksgiving dinner?