Share this news:
An improved definition of what makes a raptor a raptor results in welcoming a new species to the flock

Sometimes old concepts require fresh scrutiny, especially when such concepts may have important implications for preventing extinction. Recently, a team of scientists from The Peregrine Fund, University of North Texas, Ornithologi, EDM International, Hawk Mountain Sanctuary, and HawkWatch International revisited the concept of what exactly defines the group of birds referred to as ‘raptors’ or ‘birds of prey’. In the process, they realized that two South American species, the seriemas, probably deserve membership as raptors.

When Dr. Chris McClure, Director of Global Conservation Science at The Peregrine Fund, and his colleagues set out to provide a more formal definition of raptors, they were not looking to identify new raptors, but they found some anyway. McClure recalls, “Our primary goal with this study was to better define what a raptor is using science-based methods. No standard definition for the terms ‘raptor’ or ‘bird of prey’ existed, and we wanted to establish a common definition to help improve consistency across studies as well as lessen the ambiguity of research and management recommendations.”

Typically, more traditional groups including falcons, hawks, and eagles are universally agreed upon to be birds of prey by researchers, but groups like owls and vultures are not always included as raptors depending on the person.

When scientists make these determinations, they typically look at physical characteristics such as sharp talons or ecological traits such as capturing prey with their feet, we often assume that those species also share important features that tell us about their evolution and help prioritize our conservation efforts. That may not always be the case because traits, particularly those with strong associations with survival, can evolve independently among groups limiting our ability to inform conservation effectively.

This study narrowed the criteria to focus on evolutionary history to demonstrate that birds such as hawks, eagles, falcons, owls, and vultures all shared a common ancestry and evolved from “raptorial land birds,” or birds that live on land and feed on vertebrate animals. Additionally, the majority of the species within the identified groups that share common ancestry with raptorial land birds are more likely to have maintained raptorial lifestyles. In short, raptors are land birds in the groups that evolved from vertebrate-eaters in which most species of the group maintained that vertebrate-eating lifestyle. 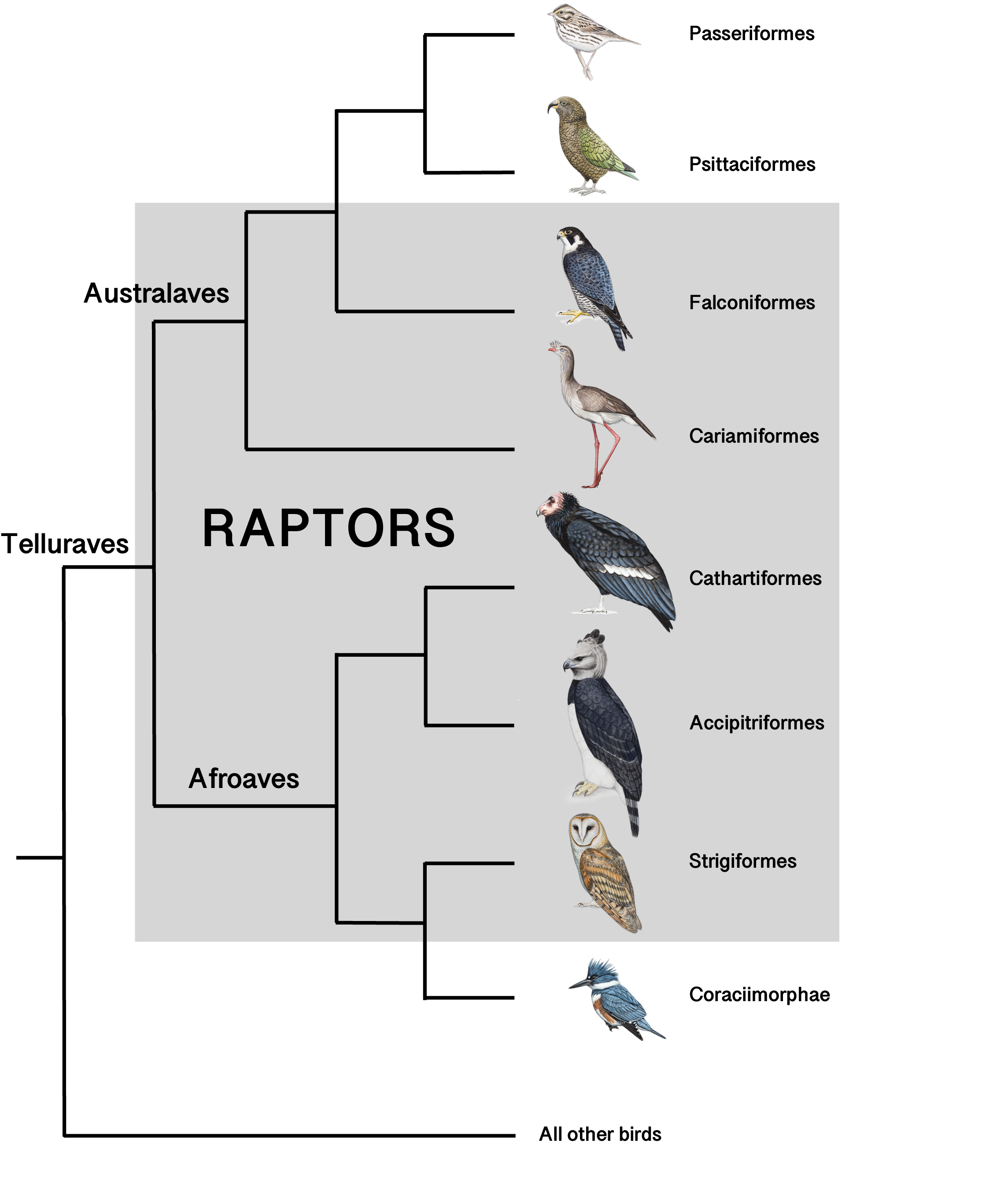 It may sound a bit complex, but Dr. Jeff Johnson, a professor at the University of North Texas, assures us, “It actually clarifies a lot of the issues previous definitions have had for the term raptor. By eliminating the uncertainty that results from relying on qualitative descriptions such as a ‘hooked’ beak or ‘sharp’ talons, and instead emphasizing our current understanding of bird evolution based on less ambiguous traits such as those generated from molecular methods, we can provide a more precise definition.”

McClure adds, “This new definition will help to influence research priorities, funding decisions, and conservation actions. If we were not already challenging older ideas that vultures were not traditional raptors, The Peregrine Fund would not have been able to, under the organization’s mission, help save vultures in Asia from likely extinction in the early 2000’s. Based on our new definition that focuses on ancestry, vultures and owls most definitely qualify as birds of prey.”

So what's the deal with seriemas?

Based on the criteria used by McClure and colleagues, another group of birds should also be identified as a raptor group. The Order Cariamiformes includes two unique species found commonly throughout South America. The Red-legged and Black-legged Seriema are very similar species found in grasslands and scrublands respectively. Bryce Robinson of Ornithologi points out, “These species could be considered as raptors because they kill vertebrate prey and are the only remaining ancestor of the extinct, giant “terror birds” that wandered South America during the Cenozoic era 62 to 1.8 million years ago. They aren’t as terrifying now, but with their penchant for capturing and killing rodents, lizards, and even venomous coral snakes, they do fit in well with the other raptors.”