Skip to main content
Share this news:
Forest protector who assists The Peregrine Fund is named one of Disney’s six Conservation Heroes worldwide

BOISE, Idaho – David Ngala, who has provided invaluable support to The Peregrine Fund’s raptor conservation projects in Africa, was recently named a 2012 Conservation Hero by the Disney Worldwide Conservation Fund.

The honor is awarded annually to individuals for their tireless efforts to save wildlife, protect habitats and educate the communities around them. Ngala is among six honorees from six countries and three continents.

Munir Virani, director of The Peregrine Fund’s projects in Africa, nominated Ngala for the award. 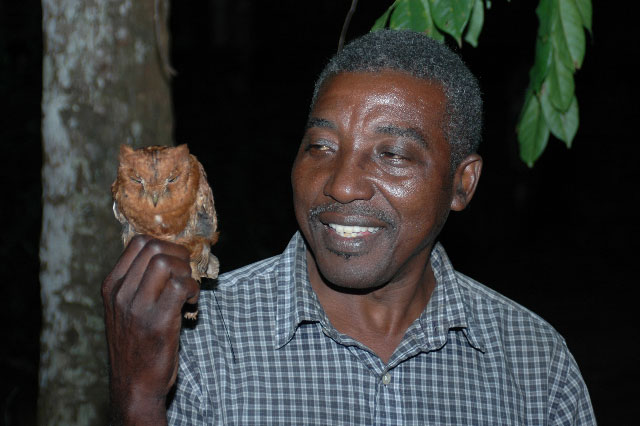 “The uniqueness of David’s work stems from his love and passion for birds as ambassadors to convey the forest conservation message and achieve habitat protection and awareness,” Virani said. “He has inspired hundreds of forest researchers, thousands of foreign visitors and hundreds of thousands of local villagers.”

The Disney Worldwide Conservation Fund congratulated Ngala for his accomplishments, commitment, and dedication, saying, “We are all so inspired by your story.”

Ngala works in the Arabuko-Sokoke Forest, home to the endangered Sokoke Scops Owl and other rare animals that depend on the remaining forest on Kenya’s east coast. Ngala tracks and stops poachers from illegally taking wildlife and timber. He has located more than 1,400 animal traps and helped arrest poachers by documenting nearly 900 paths they use.

Born in 1952, Ngala grew up on the edge of the Arabuko-Sokoke Forest, where he hunted for food to help feed a large and poor extended family. Despite a limited education, Ngala got a job in the forest nursery in 1970 and worked his way up the ranks, eventually becoming a sought-after guide for researchers and visitors tracking rare birds and animals.

When Ngala began to report signs of destructive activity in the forest, he faced intense criticism but attempts to have him removed from his post were unsuccessful and he continued to protect the forest he says he loves “as my parents.” Eventually, Ngala won over local leaders and enlisted their help to successfully stop clear-cutting proposals.

Ngala has helped plant thousands of seedlings in the forest, a process that influenced local residents about the importance of tree planting. He also has formed local conservation groups and helped people develop innovative alternative sources of income to reduce pressure on forest resources.

Ngala retired in 2007 to focus on his work with birds and conservation. He is now employed by the Friends of Arabuko-Sokoke Forest as a conservation officer.

“David has done all this with utmost humility and respect,” Virani said. “We are incredibly proud of him.”

Previous recipients of the Disney Conservation Hero award include: