BOISE, Idaho – Toby Mogavero wasn’t sure what direction his life would take before enlisting in the U.S. Army. Now, with his military service behind him, he is well on his way to his dream job of conserving the Patagonia landscape, a region in southern Argentina and Chile filled with towering mountains, huge glaciers, and amazing wildlife.To reach that goal, Mogavero is gaining valuable hands-on experience with critically endangered California Condors, a close cousin of the Andean Condor, one of the icons of Patagonia. For nearly six months, Mogavero has volunteered with the support of a national veterans group, The Mission Continues, in The Peregrine Fund’s captive condor breeding program at the World Center for Birds of Prey. Home to the world’s largest captive flock of California Condors, the facility produces up to 20 young birds each year for release to the wild in Arizona, Utah, and California.

For nearly six months, Toby Mogavero has volunteered with the support of a national veterans group, The Mission Continues, in The Peregrine Fund’s captive condor breeding program at the World Center for Birds of Prey.

The Mission Continues is a national nonprofit that empowers veterans to serve their country in new ways after leaving the military. Through the fellowship program, post-9/11 veterans volunteer for six months at a nonprofit organization of their choice. As Fellows, they also complete a curriculum designed to propel them into their next phase of life, whether employment or higher education.

“The primary goal is to empower veterans to continue their service to their country and communities and help people to better themselves,” Mogavero said. “It’s an opportunity to get exposure to a nonprofit that actually pertains to real-life experience.”

While applying for a Mission Continues Fellowship, Mogavero decided to select The Peregrine Fund as his volunteer site when he toured the World Center for Birds of Prey with visiting family members last summer. He now spends 20 hours a week observing the condors’ behaviors and assisting with their care.

“We saw the bird demonstration and immediately I asked if I could do a fellowship here. I love birds and volunteer work,” said Mogavero, who was one of 83 selected for a fellowship from 1,000 applicants. “I am very grateful for the opportunity to work here.”

A native of New York, Mogavero, 35, was a self-described ski bum before joining the Army. Since his discharge in 2008, he met and married his wife, Stacy, become the father of a 10-month-old son, and earned a bachelor’s degree from Boise State University in environmental science. In May, he will begin work on a master’s degree in environmental management.

Mogavero first became fascinated with Andean Condors in Patagonia, where he has lived off and on for 20 years. He learned to speak Spanish, worked as a mountaineering guide in the ice fields of northern Patagonia, and bought property there. Eventually, Mogavero hopes to apply his education to addressing the region’s environmental and conservation issues.

“He has really embraced the opportunity to be here,” Jenkins said. “He is constantly learning, reading everything he can get his hands on about birds. This has awakened a strong interest in him.”

An extra set of hands and eyes is always welcome in the nonprofit’s complex condor breeding operation, Jenkins said. Mogavero is a careful observer of the birds, freeing up the rest of the small staff to attend to other duties. Communication skills he developed in the military have served him well in this job where attention to detail is critical, she said.

Jim Robbins, specialist for the Mission Continues Fellowship Program, said the organization awards fellowships to veterans who are passionate about serving their community.

Robbins talks with Mogavero every few weeks to gauge his progress at meeting personal and professional goals and to make certain that he is aware of the resources available for a successful transition to post-military life.

“One of the things I like best about Toby is that he has realized how important service is to him and that it’s going to be a part of his life forever,” Robbins said. 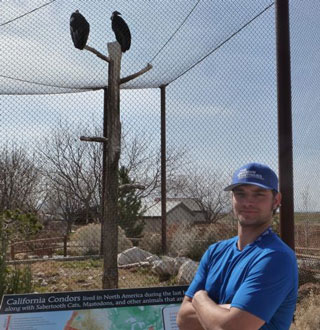 For nearly six months, Toby Mogavero has volunteered with the support of a national veterans group, The Mission Continues, in The Peregrine Fund’s captive condor breeding program at the World Center for Birds of Prey.

Toby Mogavero has organized an Idaho premiere of “The Condor’s Shadow” followed by a question-and-answer session with California filmmaker Jeff McLoughlin, biologist Joseph Brandt of the U.S. Fish and Wildlife Service, and J. Peter Jenny, President of The Peregrine Fund. http://www.thecondorsshadow.com/

Learn about our $3.2 million expansion of the World Center for Birds of Prey and find out how you can get involved!
Show me more!